BALD EAGLES AT THE DUMP

A note to readers:

I’ve got a handful of things coming out soon, but I know I need to publish more writing. I overthink then overwrite and take too long to get anything out.

I want to get feedback from you all. On things I’ve said and things you’d like me to write. What you'd like to see more/less of.

You can look forward to a piece on going to a stand up show at the Church of Scientology in Tampa coming out on L Ron Hubbard’s birthday, March 13th.

There’s another story on the way about how Ron DeSantis is winning the culture war.

I’ll be attending a Micro-Wrestling show first week of March. 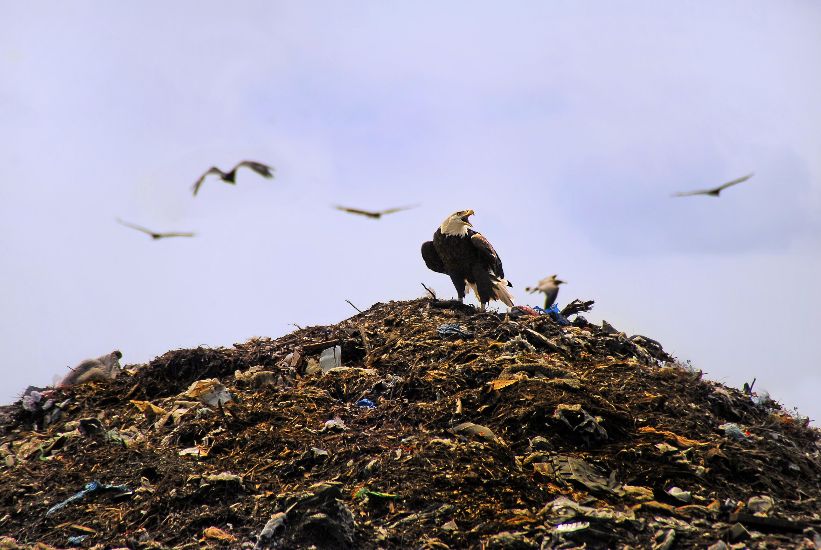 It’s eight in the morning and foggy,

and I’m at a dump for the first time in my life. The dump is one of those places you know exists, but it’s not until you actually see the thing that it becomes real. Out of sight, out of mind. Watching truck after truck empty its bowels on a mountain of compressed trash makes me think of all the lazy times I improperly disposed of my batteries. I cannot emphasize enough how much it really looks like a machine taking a shit. I always thought there was a more refined process. Like some kind of in between facility that does some quality control, but no. Whatever you put in your trash can goes into the back of a truck, which then goes straight to the dump and lives there for thousands upon thousands of years.

I’m at the dump because I’m meeting with Jack Davis, the Pulitzer Prize-winning author of The Gulf: The Making of An American Sea. Jack’s upcoming book is The Bald Eagle: The Improbable Journey of America’s Bird. It’s a redemption story that tells the history of our nation’s conflicting relationship with its symbolic bird. I wanted to meet with him and look at bald eagles. Turns out the best place to find the American symbol is at your local county dump. 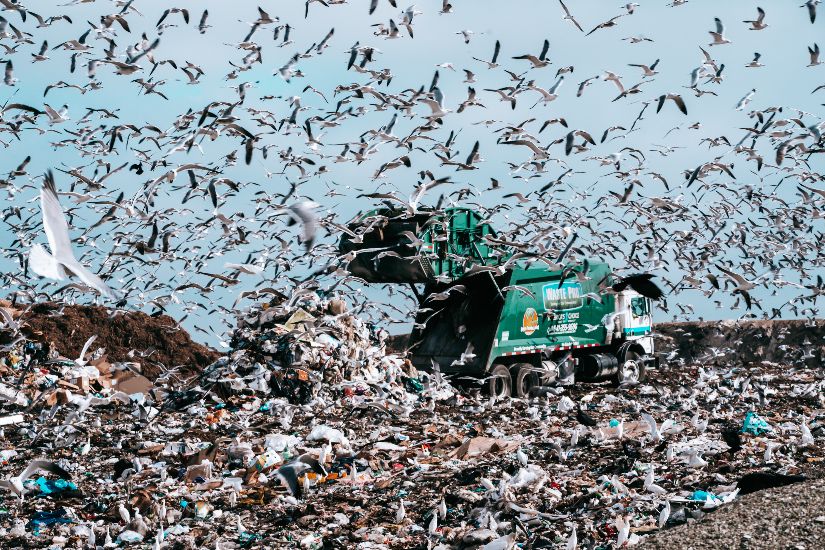 The Manatee County landfill towers over flat Florida. Nearly 350,000 tons of trash are piled skyward each year. That’s almost two million pounds every day. I was surprised it didn’t smell like much. Maybe it was because it was a cold and overcast morning. I imagine when the summer sun bakes the mountain it’s more aromatic.

There must have been over 10,000 birds. Ibises carefully tiptoed around smoking bulldozers. The vultures sat still like hunched villains. Wood storks ambled about on their stilts. Oceans of seagulls swung through the air like giant a sheet each time a new truck pulled in. One of them shit on my left shoulder. Good luck, they say! I counted at least two dozen bald eagles. Florida often has the largest concentrations of bald eagles in the continental U.S.

It didn’t seem right that any birds were there at all. But it felt especially strange to see so many bald eagles. America’s most revered bird is supposed to be soaring over purple mountains and amber waves of grain or whatever. Instead, they’re rummaging through someone’s uneaten Panda Express and bloody tampons.

One of the dump truck drivers pulled up next to me. He leaned out his window and asked, “You wanna see some eagles?” Told me he thinks he’s got a load of rats in his truck from a restaurant pick up. “It’s fun. You’ll watch the rats scurry and the eagles bomb after ‘em.”

“Many people believe it’s beneath the bald eagle’s dignity to be at the local dump,” he said. “They believe that must mean there’s not enough food out there and this is what they have to resort to.”

But Jack explained that dumpster diving is highly intelligent behavior. “Scavenging is a smart way to get calories,” he said. “They’re going where food is easiest. All wildlife does that, and the dump is a giant bird feeder.” 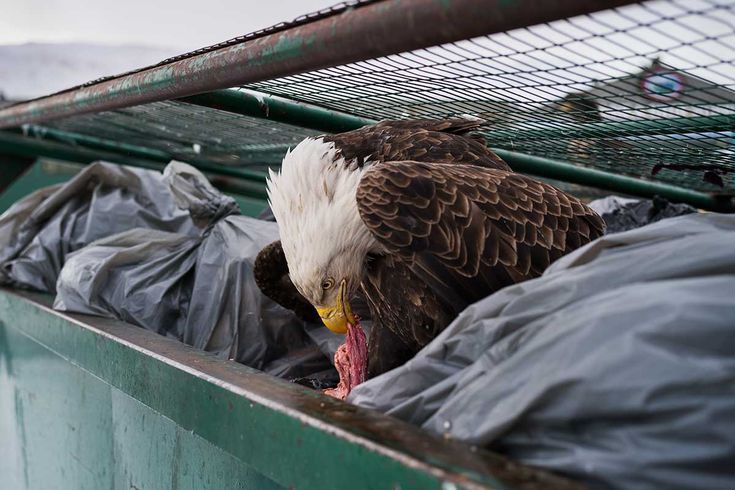 In Jack’s book, he writes about how we almost drove the bird to extinction on two separate occasions—shooting them out the sky for “science” and because of dubious, vengeful myths of baby abducting, and then again with the proliferation of the insecticide DDT. We managed to bring them back from the edge through compassion and conservation. At one point there were as few as 500 nesting pairs. Now there are over 500,000 eagles. He initially wanted to title the book to be Bird of Paradox (his editors vetoed that) because of the way we simultaneously revered and murdered the bird.

To see the bald eagle at the dump is either a paradox or a metaphor. America’s proud, powerful bird digging through garbage is sacrilege if you believe this is the greatest damn country in the history of the world. Or it is fitting if you see our empire in decline. I’ve always had mixed feelings about the bald eagle. As an adopted symbol of American imperial exceptionalism, it never inspired warm feelings in me. I remember watching a nesting bald eagle pair evict ospreys from a nest they built. I learned that bald eagles would let ospreys do all the fishing work and then just bully the bird out of its hard-earned labor. Hell of a metaphor. The eagle has also been a symbol of might and terror throughout history. Rome used the aquila as the standard of Roman legion. Germany has used the Reichsadler since the mid-19th century. 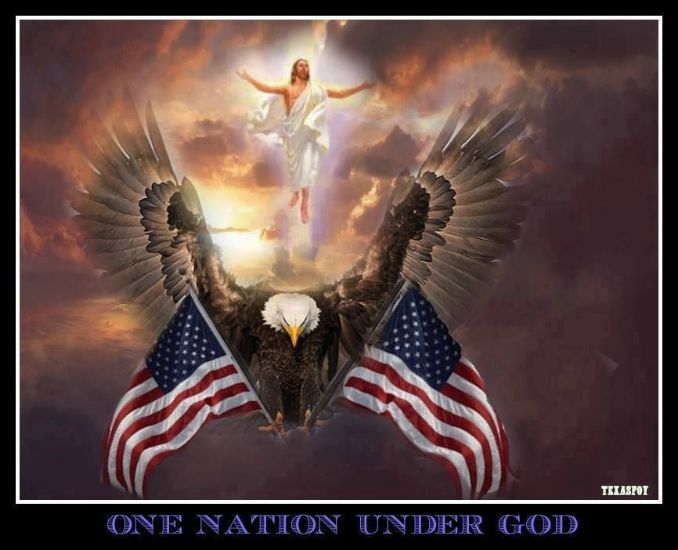 But for Jack, the bald eagle at the dump is a sign of hope. To him, the birds here mean two things. First, they are breeding. We saw mostly juveniles. You can tell they’re juveniles because they were all brown and don’t have the distinct white head and tail feathers of an adult. That doesn’t happen until they’re about five years old. All these young birds are a sign of a healthy growing population. But more importantly, for Jack, the birds at the dump mean that they are willing to live with us. He told me there was once a time when scientists thought bald eagles wouldn’t tolerate us. But here they are. And it’s important that we foster their willingness—even if it’s at the dump.

It’s not that there aren’t problems with eagles scrounging through trash. There have been instances when the birds eat an illegally dumped euthanized cat or dog and have, or a poisoned rat from behind a restaurant, and died from eating the active barbiturates and toxins in the corpse.

The eagles are also dumping trash on nearby homes. Both here in Florida and in the Seattle suburbs, eagles are driving homeowners mad by dropping rotting trash in their yards. One Seattle resident held up a plastic bag at a community meeting that contained a biohazard container filled with human blood. It’s a little karmic, having our own trash returned to us. But that’s happening anyway. We’re all getting a spoonful of micro-plastics in every meal.

Maybe the eagles at the dump are telling us something. They are telling us we cannot compartmentalize nature. A landfill isn’t any less “nature” than the Everglades. Dumps have more birds than a lot of nature reserves do. There is nothing “unnatural” about a bald eagle at a dump. The dump is nature. Maybe once we stop making that distinction, we’ll stop making so much garbage.

We can’t help but make trash. Civilization has always had dumps. In Jack’s previous book, The Gulf, there was a part that really stuck with me. It was about the thousands of shell middens that used to dot the Gulf Coast of Florida. The people of pre-colonized Florida would pile their empty shells and broken pottery on multiple-story high mounds. Some of this was just refuse, others were holy sites used for ritual ceremonies. There are only a handful of middens left in Florida. In the 20th century, the U.S. Army Corps of Engineers took those shell middens, ground them up and paved U.S. 41 with them. We are driving over Indian burial grounds every day. 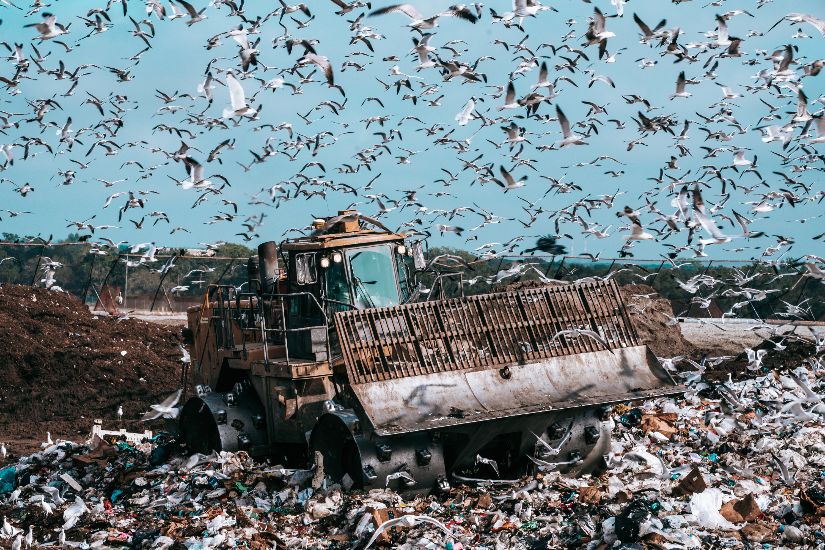 Walking around the dump I thought about alien archeologists who might land on our planet and unearth our trash millennia from now. They probably won’t know much about the eagles at the dump. Our bones will mostly be gone. So will all our art and music and clothes and language. I don’t think much of our digital lives will survive the wear and tear of time either. Our hard drives and CIA databases will disintegrate. Because of the digitization of our lives it will appear to aliens as if we just kinda stopped doing stuff in the 21st century. We forget that the internet is a physical thing stored on to something you have to hold and take care of. What will they find? Aluminum cans. They’ll think, holy shit, they drank a lot of hard seltzers and then just disappeared.

The fog lifted and most of the eagles flew away. I was told they would return in the early evening. The trucks never stopped arriving. I decided to see bald eagles at the dump as the stubborn will of life. I am often filled with despair at the state of things. I am guilty of fantasizing of a world without humans, something I know I must resist. All these birds have learned to live with us. Will we learn to live with ourselves? 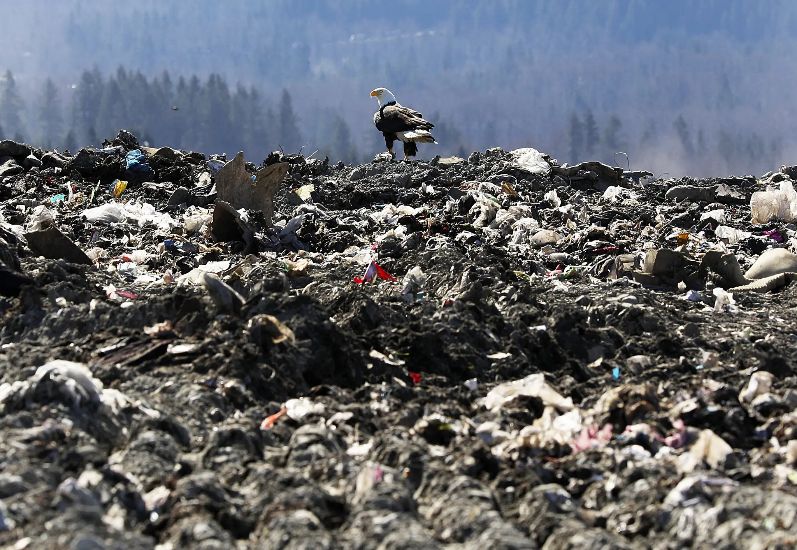