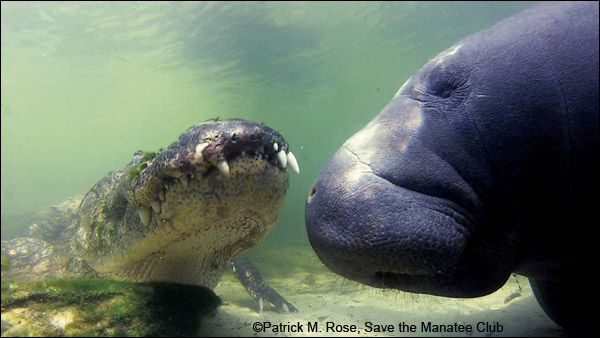 As a child I could never understand why sharks didn’t just eat all the manatees. They seemed like an easy, slow-floating buffet. Their entire existence was like an affront to the brutish interpretation of survival of the fittest. To me, the ocean was filled with teeth and hunger. But nothing eats the manatee. How could such a gentle, plump and goofy creature be? And how could you not love them for it?

Florida has many mascots—rogue alligators, blue-haired seniors, the guy who stole Nancy Pelosi’s podium—but of all these ambassadors, the manatee is best. They soften Florida’s rough edges. But now they are in grave danger. A record 1,058 manatees have died so far this year in Florida out of an estimated population of 7,000 to 12,000. That means that up to 15% of the population perished in less than a year. 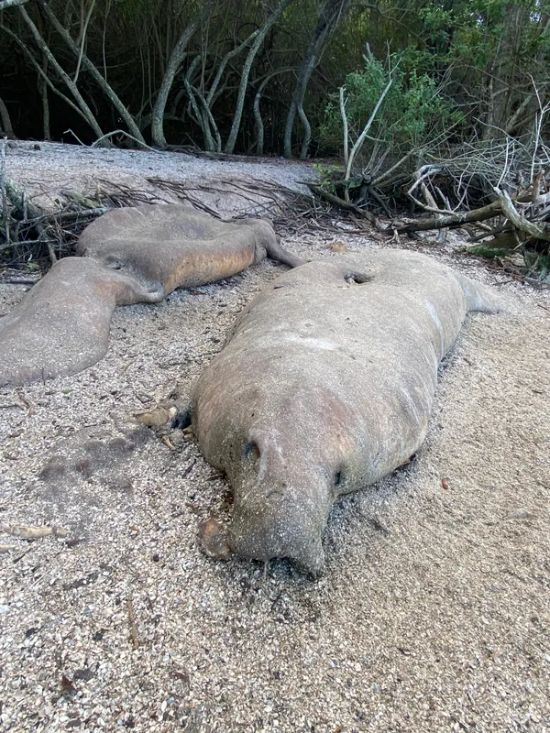 It’s not some mysterious disease or international poaching trade killing the manatees. We know exactly why. The animals are starving to death because there’s nothing for them to eat. Florida has so polluted its waters that we’ve killed off vast amounts of seagrass, the manatee’s main source of food.

The situation has become so dire that conservation biologists are going forward with an unprecedented solution—feeding the manatees. It might seem like an innocuous measure and kind gesture, but feeding wild animals is a big conservation no-no. Human interference can mess with animal behavior in unforeseen ways, changing their migratory habits and associating people with food. That’s why it’s never been done with marine animals before.

But there’s no time left to fix the cause of the manatee crisis, so we must bypass the system and go straight to the symptom. This dilemma gives us a glimpse into the future of conservation. One where we must directly intervene to prevent total collapse. It’s starts with manatees and ends with geoengineering—the deliberate large-scale intervention of the earth’s climate systems.

HOW DID THIS HAPPEN?

I remember swimming in Sarasota Bay near Big Pass with my father when I was young. A manatee and her calf popped up just out of reach. I tried to swim after them, but couldn’t keep up and then lost sight of them in the chop. I lied to all my elementary school classmates the next day, bragging that I had touched them, and they felt like slimy Jell-O.

Manatees were an endangered species then. I could have been arrested, fined up to $50,000 and jailed for a year if I had managed to touch them. But in 2017, the federal government, took the marine mammal off the endangered species list thanks in large part to the lobbying efforts of motor boating associations. Boaters just wanted to go real fast without fear of legal repercussion if they ran over a manatee (92 have died so far this year from boat collisions). The consequence of declassifying is removing certain protections and funds. President Biden could easily reverse this and put the animal back on the endangered list.

I reached out to Christina Martin, a senior attorney for Pacific Legal Foundation, a libertarian law firm that was partly responsible for the 2017 reclassification of the manatee to ask if she had any regrets now that the population is collapsing. Martin wrote a blog celebrating the decision as a long, overdue victory for individual rights. “The government's own experts were the ones who said the manatee was no longer endangered,” Martin told me in an email. “When the federal government looks again at whether the classification of the manatee is still proper, as the ESA requires it to do every 5 years, I hope its decision will be based on facts and reason and not on politics or hyperbole.” Trouble is, the government “experts” who decided the manatee was no longer in danger were using a bogus computer model that incorrectly projected manatee population. Many conservationists pointed this out, but their concerns were ignored.

Whether she regrets it or not, we shouldn’t be surprised that the manatee population is in decline. The writing was on the wall.

When it gets cold in the winter, manatees huddle together in shallow, warm-water refuges to stay alive. That’s why you will see them in large groups at the discharge channel at the Big Bend Power Station in Tampa Bay. The water used to cool the plant’s power units gets dumped into the canal and the manatees jacuzzi there. Another popular manatee spot in the winter is the Indian River Lagoon on the Atlantic coast. But since 2011, as a result of excess lawn fertilizer, leaking septic tanks and other nitrogen-filled pollutants that make their way into the water, a series of harmful algae blooms covered the lagoon and reduced the ability of light to reach the waterbed, killing more than 58% of the seagrass.

The Indian River Lagoon, once considered one of North America’s richest estuaries, is now ground zero for manatee deaths in the state. In 2021, hundreds of manatees were found emaciated and dead, floating in the lagoon’s polluted waters. A starved manatee is a strange sight to behold. They look ghostly and deflated. Even the vultures seem unsure what to do with such a corpse. 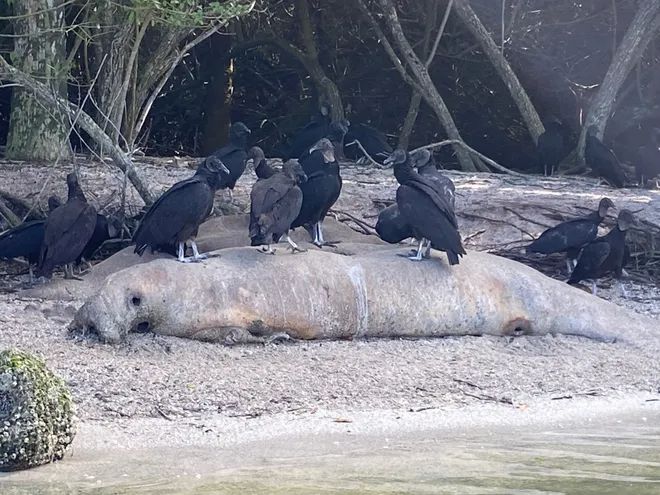 Using the same methods marine biologists developed in captivity, the state government finally gave the green light in mid-December to feed the starving animals after many months of lobbying from conservationists. They will buy many hundreds of pounds of romaine lettuce every day, stick them in floating PVC pipes, and leave them in areas for the manatees to find without associating the food with humans. The hope is to prevent more death to keep the breeding population healthy until we figure out how to clean the waters and regrow the seagrass.

Some believe we should let nature run its course. American Watercraft Association boating lobbyist Peggy Matthews argued in favor of culling the weak manatees to save more food for the strong because the animals had “exceeded their carrying capacity” and were to blame for eating up all the seagrass. The Florida Fish and Wildlife Conservation Commission (FWC) has its own concerns. It believes feeding the manatees will have unexpected consequences like altering the behavior of “naive” calves, stress them further by creating competition for food or “Cause significant logistical and financial obstacles to agencies already strained with working on the manatees' recovery and tarnish their credibility if it doesn't work.”

It feels cruel to let the manatees fend off starvation by themselves for a problem that we created. But this is a kind of crisis we can expect to deal with more and more in the near future. How much are we to intervene with collapsing ecosystems?

This manatee crisis is microscopic compared to what we are going to have to do in the face of climate catastrophe. Like the manatee, our ecosystems are being pushed to the limit. And like the manatee, the solution to the crisis is to deal with the source of the problem. For manatees, it’s improving water quality. For the planet, it’s ending the use of fossil fuels and removing carbon from the atmosphere. Trouble is, we are only pumping more carbon into the atmosphere, guaranteeing our need to directly intervene with our planetary climate system. So the planetary equivalent to feeding the manatees to prevent starvation is to geoengineer our way out of it.

If you’re not familiar with geoengineering, it is the technocratic Hail Mary fetishized by Silicon Valley as a solution to the climate crisis. By using emerging technologies to alter variables in the earth’s whole ecological system, we could hypothetically stop, or even reverse, the worst effects of climate change. Some examples of geoengineering solutions are launching giant, satellite discs into space to reflect the sun, seeding clouds with salt to reduce infrared radiation or fertilizing the ocean with iron to trigger plankton blooms that would absorb carbon dioxide.

There is already one geoengineering technique that is ready to go: stratospheric aerosol injection. Basically, we could use aircraft to dump sulfur dioxide into the stratosphere to dim the sun by a couple percent. This works the same way a volcano does when it erupts. When Mount Pinatubo in the Philippines blew in 1991, it created a mini-ice age for a few years, so we know it sort of maybe works. This method of aerosol injecting could be done for very little money—just $2.5 billion per year—contributing to its appeal. 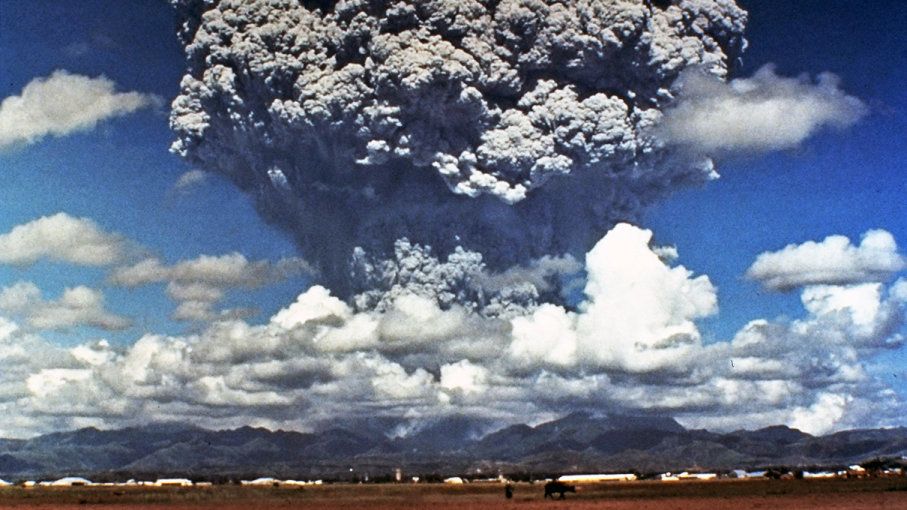 The best-case scenario of this method of geoengineering is that it would give us a couple of decades to figure out how to solve climate change and steer away from fossil fuels. But the potential consequences are terrifying. It will turn our blue skies a perpetual grey-orange. It will further acidify the ocean. It could burn a giant hole in the ozone. It could change rainfall patterns, potentially starving billions of people. But critics hypothesize that the natural cycle would start back up, the artificial cooling we created would abruptly end, and we would cause an explosion of heat in a very short period of time. This heatwave would disrupt every major ecosystem so quickly that very few living organisms could adapt in time. In other words, the medicine of geoengineering could be worse than the disease of climate change. To prevent this, we would have to become the permanent stewards of this planetary intercession.

The best thing would be to let the planet sort itself out while we attempt to mitigate the worst of climate catastrophes effects. We must keep our hands off these systems. In the short term (geologically speaking), things would be rough. But life on the planet wants to live. It has survived five previous extinction events—there’s the famous dinosaur-murdering meteor we all know about, but there was also the time some 700 million years ago when the entire earth was covered with ice and snow and life miraculously found a way.

This manatee experiment is a litmus test for our ability to intervene in earth’s systems. We will feed the manatees and keep them from going extinct. But will we fix the problem at the source and stop dumping pollutants into our waters? So far, all the money that Florida Gov. Ron DeSantis has allotted for saving the manatees is to save and rehabilitate the sick ones. He has made no serious promises to clean up the water. If we can’t fix this small problem, we can’t be trusted with a planetary one.