The Blueberry at the End of the World (Paywall)

How am I going to survive the coming apocalypse if it takes me more than two years to grow a single blueberry?

I planted this blueberry bush a few months into COVID. I won’t lie, I was initially spooked by the virus. For the first couple months I wiped down every grocery item, every banana bunch, even my credit cards, with alcohol. I bought giant bags of rice and dry beans. I can proudly say I did not freak out and buy a bunch of toilet paper. I filled my little garden with survival crops—cassava, sweet potato, moringa, mulberry, yams and the blueberry bush. These plants were supposed to put me on the road to self-sufficiency. Things grew with varying success, but after a couple of years, all that came out of the ground wouldn’t have been enough calories for more than week, let alone some indefinite Florida apocalypse.

We can’t be afraid of the end of the world all the time. It’s too exhausting to think about UN climate reports everyday. Sociopathic heads of state with their fat fingers hovering over nuclear buttons of Damocles should keep us up all night. But the media feeds us existential worry at a sustainable level. Just enough to not do anything about it, but feel good about ourselves for caring. I’m still growing food in my edible garden, but without consideration for survival. But then I saw it. A lone blueberry sitting at the top of my bush. I’d nearly given up on the plant. Still an unripe mint green, the berry wasn’t blue yet. But it reminded me why I grew it in the first place and the tenuous state of things. 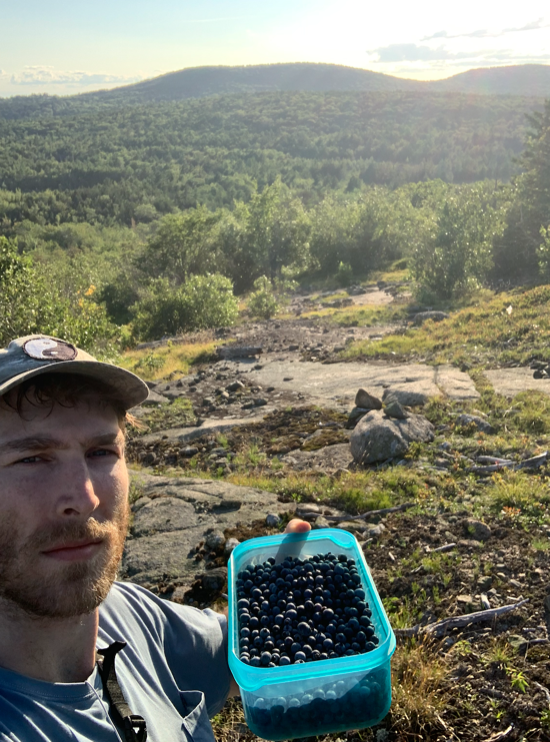 (There are a lot more blueberries in the mountains of Maine)

Even before COVID, I wanted to sever my dependence on Publix. For years, I have fantasized about living off the land, away from supply chains and fruitless politics. It seemed noble to work the earth. A simple and spiritual way of life in contrast to the unnecessary complexity of godless modernity. I don’t think about my future much, I believe it’s a waste of time, but when I do, I see myself on a farm.

But people left farms for a reason. It is very hard work. I remember telling my friend from Vermont we should buy 40 acres up north somewhere and grow food. He told me to read The Good Earth, an old, classic novel about a farming family in a village in pre-revolutionary China. It depicts farm life as a harsh existence in a land indifferent to the suffering of people. My fantasy wavered a bit.

I am not alone in my fantasies. This desire to return to the land is shared across political ideologies. I’ve spent time with homesteading anarcho-primitivist libertarians. Communists valorized the farmer in art and song. Even Nazi’s romanticized tilling the land with their “Blood and Soil” campaign. There’s a new movement online that turns the farm life into an aesthetic. They long for traditional gender roles and wear hunting camo and go on weekend excursions outside the city to pet goats and shoot guns at cans. “Hicksploitation,” my friend Dylan calls it. It’s funny seeing these sickly pseudo-intellectuals complain about a world that is designed precisely for them.

Weird gender role stuff aside (again they she really read The Good Earth where “girl” and “slave” are used interchangeably), I think it’s perfectly beautiful to want to return to the land. Trouble is, today’s world would never let us. It used to be you could run away from society and live in the woods. I don’t think that’s possible any more. There is no where left to run. The world is wholly industrialized. And most of us have no idea how to live outside of a market economy society. They stole the knowledge of the land and the land itself. What they haven’t already poisoned, they will make unavailable to us.

In coastal Florida, you used to be able to get your fill out of the sea. The Gulf people—before Europeans came—pulled mountains of shellfish out of the water and stacked the empty shells into three-story high middens along the coast. They were giants. Fed by an abundance of protein, they stood over 6 feet on average and towered over the diminutive and stinky Spanish. Today, I wouldn’t dare eat an oyster out of the bay. My old piano teacher told me that as a child in the 1940s, she would wade out into the water and collect shellfish for family dinner. But then they dredged the oyster bed, filled it with concrete and built the Bird Key Yacht Club on top of it.

I fear technocracy will completely alienate us from our relationship to the earth and technology. What’s left of our green space will be private preserves and all our tools with become seamless orbs that you cannot open. Their secret guts will only be accessible through unearthly middleman operating a call center in the sky.

But the knowledge to make things grow is still useful. We can’t let it disappear. They cannot upload the earth onto a computer. Life will still want to live. So I became obsessed with the blueberry.

I watched the blueberry grow and I become superstitious. There had been other blueberries, but they either dropped early or the squirrels ate them before they could turn blue. So all I was left with was the one. In this lonesome blueberry was my fantasy. And in order to keep my fantasy alive, I had to make certain that this fruit would ripen and I would eat it. For weeks, every morning and every evening, when the squirrels are most active, I would check on the blueberry. The mint green turned teal and then navy. On the blueberry was that white, powdery veneer. I learned that’s called “the bloom” and it’s like the fruit’s very own sunscreen. It is the blueberry’s natural protection against he sun.

I waited until it seemed perfectly ripe and then I picked it. To make it more ceremonial than just popping the thing in my mouth, I cut the single blueberry in quarters and ate it with a knife and fork. Fruit grown at home and freshly harvested always tastes better than the store bought stuff, but there wasn’t a lot to make out of just one blueberry. Blueberries are meant to be eaten by the handful. But from what I could make out, it was more sour than your store bought blueberry. While trying to savor the extremely meager bites, I thought about the future. How can I give up on politics if I can barely grow a single blueberry? But we should keep planting seeds. Sometimes the most revolutionary thing you can do is grow food to feed people. My blueberry bush is still young. As it matures, it will make more blueberries.

Thank you for being a paid reader of Apocalypse Florida. This newsletter edition is for paid subscribers only. That means my other, more miserly newsletter readers do not get to read it. I wanted to make you all feel special for your generosity.