COMEDY NIGHT AT THE CHURCH OF SCIENTOLOGY: PART I 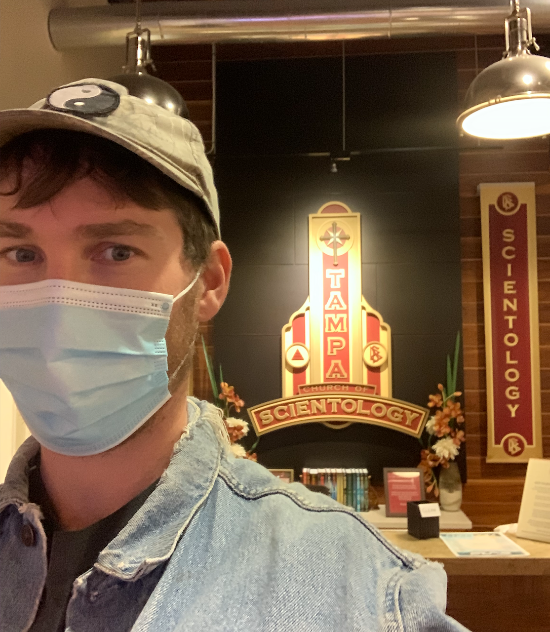 The Church of Scientology Tampa building takes up an entire block in the middle of Ybor, right in the middle of Tampa’s party district. In the late 19th century, the building was the American Cigar Company and the city’s first cigar factory. The Cuban revolutionary José Martí gave speeches there. The Church bought it in 2010 for $7 million.

Inside the Church of Scientology Tampa, they asked us to wear masks and very loose-fitting surgical gloves. I wondered what their vaccine policy was. Did the church have its own mandate? Were they anti-vaxx? Scientology has a very antagonistic relationship with the pharmaceutical industry. They believe that psychiatric meds do more harm than good. The Church often claims that the bad press they get is funded by “Big Pharma” because of all the work Scientology does to tell the public the truth about their medicine.

The Scientologists at the reception desk had us write down our names and give our phone number and email address. I made up my info. Then I followed a woman with an indistinguishable European accent into a large, open room that was clearly once the cigar building’s factory floor. The Church likes to talk about how they’re preserving Florida’s past by purchasing and restoring the historic building, but I saw nothing inside that showed they were doing any preserving of Florida history. Instead, there were a serious of themed booths with flat screen televisions meant to educate on tenets of Scientology. It reminded me of that EPCOT “ride” where they let you try different sodas from around the world. Maybe this vaguely European woman and the booths could tell me what exactly Scientology is.

Each booth had videos with impressively high production value. Slow motion videos using craned cameras with footage of traditional looking children running in a grassy meadow. All rather quaint. The information each booth shared was technical jargon. One booth spoke of “thetans” which they say is one of the three parts of man. It is “the spirit…(from the Greek letter theta, meaning thought or spirit.) The thetan is the individual himself. He is a spiritual being.” Another booth detailed the “Eight Dynamics of Existence.” According to the booth, the first dynamic is the self. The eighth goes all the way up to infinity. There was a booth about the Church’s “Criminon Program” which claims “Prison violence drops to 0% in prisons using the Criminon Program.” It is unclear what that program is exactly. 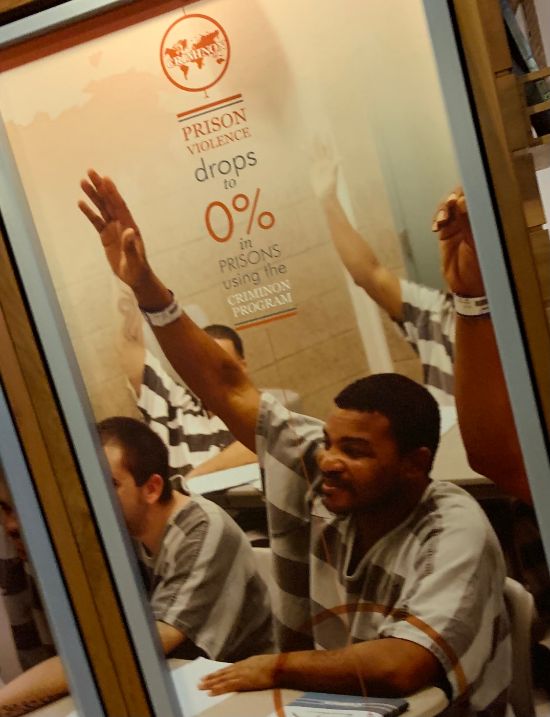 This lack of clarity surrounds the Church of Scientology. If you ask a Scientologist about the metaphysics of their religion, they will describe the teachings of the Church the same way a Buddhist will tell you that Buddhism isn’t really a religion, it’s more a way of life. Most current followers of Scientology will tell you that the stories of the memories of ancient alien races inhabiting our bodies is a bunch of stuff that South Park made up.

What also wasn’t clear was what Chris was and was not allowed to say during his stand-up set. Chris was invited to perform at the Church by a fellow comedian named Dick, who organized the show. Dick is the only Scientologist stand-up comic in the world. Before the show began, Dick told Chris to not be too vulgar. The Church was recording the show and it was going to be broadcasted on the Scientology Network, the organization’s very own streaming platform.

We walked into the performance hall. It was in a long and narrow room with low ceilings. On the walls were quotes of Hubbard’s. In the right corner of the room was a spotlighted bust of Hubbard. He looked like the principal from Ferris Bueller’s Day Off. Maybe 30 people were in the seats eating cheap charcuterie and drinking LaCroix flavors I’d never heard of before. The majority of the audience seemed to be friends of the non-Scientologist comedians who were performing. There was a table of young Scientologists and they all appeared to be on a date. The purpose of the show, according to Dick, was to provide a social event for members of the Church to attend and congregate. One girl stuck out in particular. She was at least six feet tall with heels and wore a red dress and had red hair that was religiously long. Hubbard had a thing for redheads (he was one). He thought they were descended from a superior gene pool. He would have been very pleased to see her in the room. 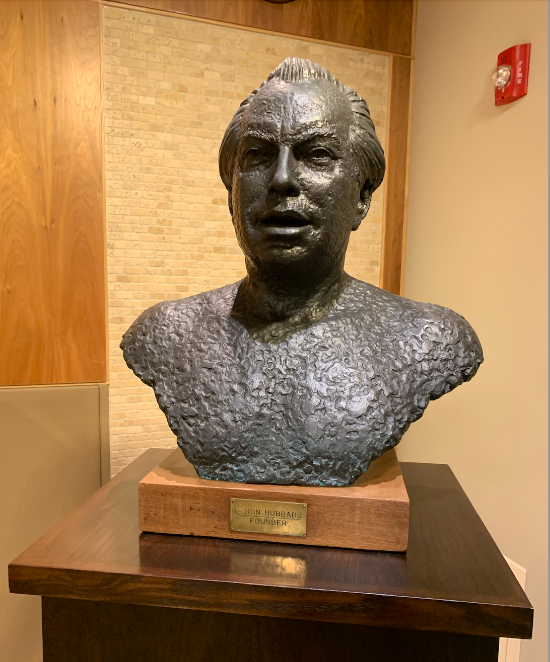 Chris carefully waded into to some jokes about Scientology. Something about how he wanted to be a Scientologist growing up, but he couldn’t afford it and went to community college instead. He also looked out into the crowd and said there weren't a lot of black members of the Church. The audience said that wasn't true.

But it was headliner JJ Curry, a black comedian from Georgia, who pushed things too far. He started his set by picking up the microphone with one hand and holding his face with the other and said, “I’m too high for this right now.” After the show, I would tell JJ that Scientologists were very anti-drug.

“I wish they had given me a pamphlet or some reading material!” JJ said.

JJ wandered in and out of his regular material to just talk about how awkward the whole thing felt. He said how difficult it was to be funny without being able to talk about things. “Man, fuck it, y’all ain’t inviting me back,” JJ said. He asked the audience some questions and got a couple of answers.

In spite of that, everyone was friendly after the show. The Scientologists came up to Chris and did a little small talk. They insisted Chris return and perform again. For a group of people who are widely demonized as brain washed, dangerous automatons, they were all pretty chill. The entire time I was there, even at the education booths, no one ever tried to to convert me. No one ever asked for any money. Overall, it felt harmless. 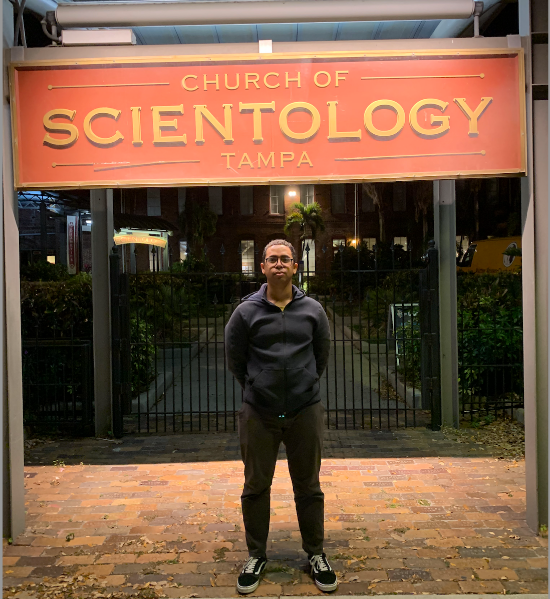 (Chris Sanders outside the Church)

We left the Church and I looked at the building. All the lights were on and the curtains drawn in every room. It’s easy to make fun of Scientologists. They weird and reclusive. They’ve had a string of strange ambassadors over the years. Tom Cruise jumping on Oprah’s couch. John Travolta’s sordid and tragic personal life. Charles Manson dabbled in Scientology in the 60s. David Miscavige’s missing wife.

So let me tell you about one cool thing Scientologists did.

In 1979, they claimed to have found documents through a Freedom of Information Act request that proved that the CIA had conducted open-air biological warfare experiments on the people of Tampa in the 1950s.

In 1955, a whooping cough outbreak killed 12 Tampa Bay residents and sent over a thousand to the hospital, tripling the previous years records of the virus. This outbreak, discovered by the Church of Scientology’s “American Citizens for Honesty in Government” by using CIA financial records, was a part of a larger CIA program called MK-ULTRA that conducted all kinds of biological, chemical and psychological experiments on US citizens.

A week later, Chris told me that the Church of Scientology refused to give him the tape of his performance. According to an email from Dick, the show contained “offensive and false info about the church so they have opted not to share the video.”

It’s a shame because it’s one of Chris’s best sets.

So with my interest in Scientology piqued, and with Chris in need of his comedy tape, I decided I would go to the Church of Scientology headquarters in Clearwater, Florida to see the place for myself and to ask for the recording of Chris’s show.

PART II TO BE CONTINUED NEXT WEEK...

Another reminder to check out the podcast CHEESEBURGER IN BABYLON. Where Chris and I interview the world's only Scientology Standup Comic.