{"The following literature is copied from the public analysis of Michael Bernard on March 7, 2013} Although the formatting for this document has suffered; it is in no other way altered from its source.

The currently accepted theory regarding autonomic control of heart rate holds that humans control heart rate primarily through parasympathetic innervation via the vagus nerve. This enervation provides the regulation that “controls” the activity to the S-A node (pacemaker) during rest and recovery. At rest, the sympathetic nervous system is not active. Instead it responds to “fight or flight” stimuli, like periods of stress or physical exertion by releasing norepinephrine, a neurotransmitter that increases heart rate and blood pressure. In addition to direct nervous stimulation of the heart, sympathetic activation stimulates the adrenal glands to release epinephrine and norepinephrine into the blood.

Although an in-depth literature review covering the topic of conscious control of heart rate is beyond the scope of the present study, a brief review seems warranted. Although there may have been some early studies, concentrated study into conscious control of autonomic functions was initiated at the Menninger Institute in the early 1960’s. In 1970, Elmer and Alyce Green had the opportunity to conduct a number of tests on a yogi named Swami Rama who claimed to be able to control a large number of autonomic functions, including stopping his heart for multiple seconds (Green, 1977). Numerous other studies have followed looking at the mechanisms underlying neural enervation of cardiac muscle in animals, and the role of biofeedback in conscious control of autonomic functions in humans. Interestingly, it seems that the vast majority of these studies have focused on engaging the parasympathetic system for slowing the heart and/or reducing blood pressure as a means of treating disease. A recent publication “On the Conscious Control of the Human Heart” (Pokrovskii &Polischuk, 2012) does an excellent job of summarizing the current thoughts regarding some of the potential mechanisms underlying conscious control of (slowing) heart rate. In short, they conclude that the majority of conscious control of heart rate is managed via changes in breathing frequency or abdominal muscle tension.

Our subject for this experiment claims to be able to “generate essence.” This generation of essence results in elevated heart rate, and blood pressure and increased dilation of the eye. Furthermore, he maintained that he could generate this essence in a graded fashion, although it becomes difficult to hold the energy for an extended period of time.

Following acquisition of resting data the subject was asked to “generate essence” in a graded fashion holding each sub-maximal level for approximately one (1) minute. When it was explained to the testing team that one (1) minute was too long for the higher levels it was agreed that the subject would hold levels of 2.2 and higher for approximately thirty (30) seconds. Ventilatory and metabolic data was gathered continuously, 10 second ECG tracings (and HR) were captured at the beginning and end of each (sub)level and blood pressure was gathered at the end of each main level (e.g. 1.3, 2.3, 3.3).

Following this initial testing protocol the subject wanted to demonstrate the higher levels of essence generation that he was able to achieve in an “all-or-nothing” non-graded fashion. After returning to a near-resting state, the subject generated level 4 essence while sitting, which he was able to maintain for 43 seconds. After again returning to a near-resting state the subject stood and did two additional generations coded as COND ESSENCE (17 sec.) and PRIMAL (15 sec.) It should be noted that during the PRIMAL testing the subject made a number of “grunting” vocalizations that may have adversely affected the reliability of the ventilatory data.

The complete tabular form of the results is unwieldy to present here, and so is included for review in the attached excel spreadsheet (Results Summary Tabular Form). Following is a brief summary of the results:

Heart rate does not return to resting levels which potentially suggests the presence of excitatory hormones in the bloodstream.

T-Wave flipping in the inferior and some of the lateral leads with essence generation.

Likelihood of hyperventilation immediately prior and following COND ESSENCE.

Increase in R ratios during graded essence generation (reflects either increasing reliance on carbohydrate over fat as fuel source or greater hyperventilation.)

It appears that the subject can consciously raise his heart rate and blood pressure in both a graded and sudden fashion without a concurrent increase in ventilatory or metabolic function. This is likely achieved through conscious control of sympathetic nervous activation. This may also be combined with conscious inhibition of the parasympathetic nervous system. While his heart rate recovery is also rapid, it does not return to resting levels, suggesting a “wash-out” period. While far from conclusive, this wash out period implies that this sympathetic nervous control is not localized to cardiac enervation, but is instead system-wide.

The fact that T-wave inversion was observed on the ECG during essence generation was initially a cause for concern—and the reason that Mr. Bernard’s ECG was sent to our team cardiologist. The T-wave is a graphic representation of the repolarization of the electrical cells of heart’s ventricles. During exercise testing inverted T-waves are commonly interpreted as indicating ischemia—a potentially damaging and deadly condition. However, at rest, T-wave inversion may occur because of hyperventilation, anxiety, electrolyte disturbances, or an enlarged left ventricle (associated with high levels of fitness). Additionally, non-ischemic T-wave inversions often occur with supraventricular tachycardia (which may be what we are observing in this case.) Dr. Ajit Raisinghani, EPARC’s team cardiologist, indicated that he felt that in this case the T-wave inversions are not something to be overly concerned about, and do not require immediate attention.

Interestingly, there seems to be a community of people that share the abilities described by our subject, namely the ability to focus their intention to do some or all of the following: a) increase heart rate, b) increase blood pressure, and c) dilate the pupils (http://forums.webmd.com/3/heart-disease-exchange/forum/5). The presence and/or nature of any physiological advantage(s) conveyed by this ability are currently unclear.

As it stands, this investigation needs substantially more data in order to begin to draw conclusions regarding the nature and mechanism of this subject’s conscious capabilities. Assuming that cardiac dysfunction is ruled-out and that the subject is safe and willing to continue further testing seems warranted. Recommendations for additional tests include (but are not limited to)

EMG monitoring during essence generation to quantify the amount of muscle activation—specifically the muscles of the abdomen;

Serial blood sampling during essence generation to monitor the (dis)appearance of catecholamines released in response to sympathetic nervous activation;

Monitoring of stroke volume and HR simultaneously to determine if cardiac output changes are observable during essence generation.

measurement of pupil dilation, with or without pharmacological manipulation to differentiate sympathetic vs. parasympathetic activation

measurement of skin temperature as a marker of possible sympathetic activation

having Michael try to deliberately lower his heart rate 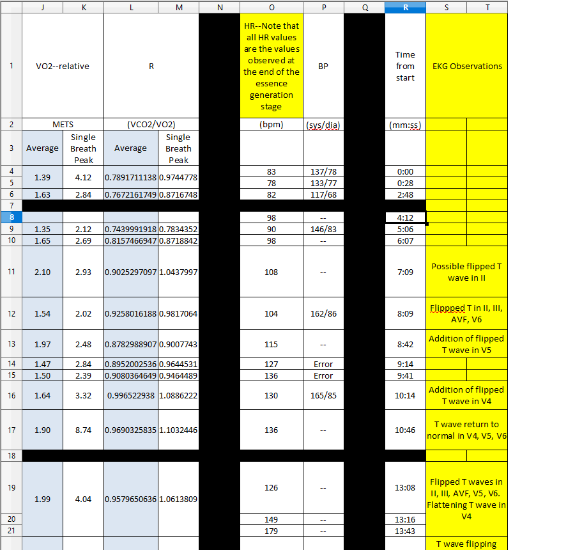 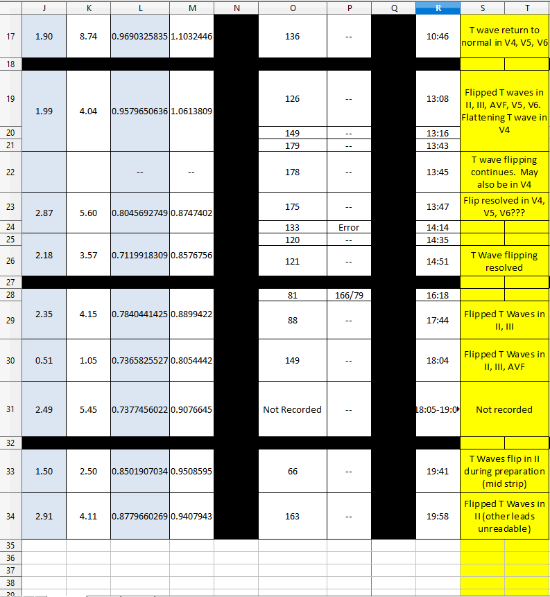