Tension, aggravation, frustration, annoyance, and irritation are all different words for mostly the same feeling.

This feeling can be fostered by us and funneled into action.

In fact it is this same feeling that is most likely to be the very first feeling one attempts to direct into an action.

The desire to direct such a feeling into action comes from the desire for a relief from the pressure associated to the feeling being present in oneself.

This pressure is precisely what we need to focus on, refine and control.

We want to control this pressure without allowing the negativity associated to the negative emotion at hand to affect us.

We do this by applying essence in an inwards and downwards direction. We want to aggravate further; that said emotion and release it with proper timing out onto something.

All of this is to say that these choices are done with a subject source in mind. There is no purpose in applying such intentions without target. One would say you should then simply deny them as is the safer decision.

One would think another needn't “teach” how to naturally encounter tension as it is most likely to be one of the most present feelings in many a people today. One could say it to be exquisitely rare that another gets through a day in their life without encountering tension at least once.

However the purpose of this written statement would be ill fostered if I did not conclude with a method.

1. Quickly and brazenly slap a solid surface with moderate to high speed

2. Have another individual aid you in being suddenly slapped somewhere on your body. Preferably your face for optimal effect.

With all this being said It would be thought that one needn't practice this to be at least somewhat familiar with the premise here.

Understand tension and seek versatile control over its potency. Recognize it and use it when it naturally occurs for even greater potency. Tension is to be seen as a negative emotional strength in that it offers higher potency for lesser stability. With this being said it remains as being one if not the most stable negative emotional strength available to a budding user. The pairing of tension with a high flow build of essence and expelled out of the body with an essence movement is one of the most simple and stable 2pt formula's a budding user can and should practice.

As shown below in this rather expediently thrown together, unrefined chart; tension can be any general emotion associated to anger yet in a far lesser form. 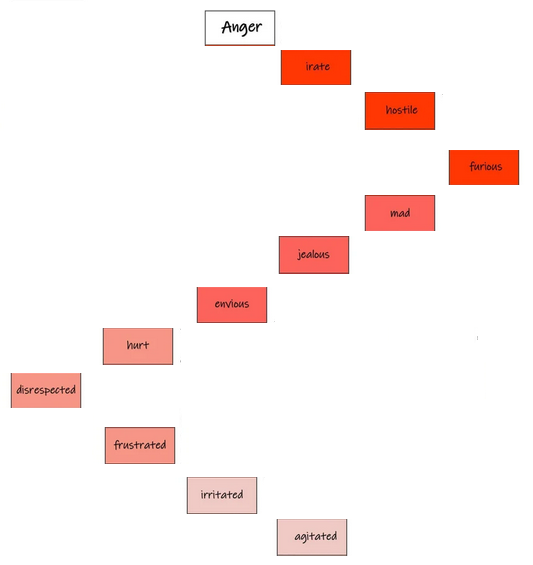