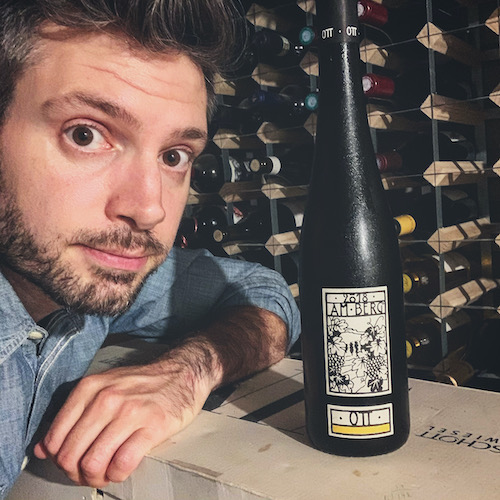 How has the week been for you? At GoodZouk Towers, outside booze and children, all I heard about recently was the shipping industry is in a tight spot and apparently the only way we can protest in the UK now is by carrying a pint of milk on us... Can anyone explain to me what's going on please? I critically lack the faculties and the contextual information to make sense of it all.

Firstly, super mega thanks to those who responded to my tasting invite, it is much appreciated and I promise you, you won't be disappointed. There are still 6 places available. If you'd like to attend but something prevents you to, let me know and we'll figure something out.

A short word about Natural Wines

I had a bit of a shock this week when I semi-mindfully posted an observation about the state of the natural wine market on Twitter and my phone went mental for almost 24 hours.

What is Natural Wine:

You've probably heard of it somewhere but for the purpose of this missive, let's say it's wine made without resorting to the arsenal of tools and chemical products available to make and tweak wine, at least as much as possible. (Just saying that could attract all sort of twitter militia).

In case it's still a mystery to you, food and drinks can legally be quite dramatically manipulated to make them look and taste the way one would want to. Sometimes they even need to be manipulated to make them safe from previous manipulations. Obviously we're talking about a spectrum here but the debate lies in where on that spectrum should we place the marker that says: on this side, your wine is natural, on the other.... well it's not. And if your wine is not on the right side of natural, what does that actually mean? That your stuff is poisonous dirt?

I firmly stand for "Drink what you want... or the best you can afford". But I would very much like people to not be lied to about what they're being sold. The level of bullshit coming from some corners of the "Natural Wine" world is really frustrating because it not only misleads consumers (you, and that's a mild way of putting it) but it discredits many people who do fantastic work around the world, in the vineyard, in the winery and in wine shops and bars.

And that's been allowed to flourish via the Instagrammatisation of marketing. So there, this is a little teaser of my gripe and a forthcoming long-form on the subject which might take me a while to birth.

If you're interested about it before then though, always happy to setup a Zoom chat and sort out a few samples of what I mean, although I try not to keep the stuff that tastes like arse ;-)

What's in my glass?

If you must know, while I have tasted a lot of good stuff lately, only a couple of things have really captured my imagination:

8 months in 300 litres French oak barrels gives it superb texture and weight but not too much toast or oak flavour. The result is phenomenal. An array of aromas and flavours from sweet dried fruits, nuts, marzipan, slight sweet toast and then citrus fruit, minerality and a great acidity that carries the wine for a long finish. The wine is totally dry I hasten to add, it's just the flavour characteristics that are reminiscent of these sweet influences. Truly unique and outstanding. Watch out for it in April as we lead a Campaign on the wines of Rueda. There won't be much of it around. Oh and it's Organic by the way ;-)

It didn't take long for us to get here but you need to know this: I love Syrah. One of my top 3 grapes. But I mostly love it when it's from the Northern Rhone. No other places on earth have can do Syrah like the Northern Rhone. This is a serious one and it's still a baby. Yves Cuilleron is a bit of a star in the area and is most famous for his Cote Rotie but I can't afford those. St Jospeh is an excellent appellation that provides awesome quality without the star-factor price tag of Cote Rotie in my opinion. This is a wine that shows superbly what Syrah does: tension and power. From a granitic soil (magically leads to high minerality in the wine) and 16 months in barrels (which you wouldn't know), there is a lot going on but it's all in finesse, delicate. What I mean by tension is that between the intensity and depth of the fruit and other flavours on one hand, and the mineral freshness and texture on the other. The purity of the fruit, typically dark cherry, is superb. I love cherries. There are a lot of tannins as well but they're fine and ripe so they don't hurt and instead provide this slightly earthy, wholesome mouthfeel. The level of acidity, tannins and concentration really suggest this is one to keep for a few more years. I feel it's only starting to show what it can do. For a wine under £30, this is really good.

Not that much sadly due to time pressures but let's not complain. I've given Steven Wilson's latest opus a good go on one of my runs though and I really don't think I'll buy the CD. His brand of pop is definitely quality on the production side but it fails to captivate me. Still, I think he's right to keep changing the direction of his craft, it can only add to his repertoire of ideas for future productions which I believe are in the pipeline. Since he cancelled his tour recently, I hope he'll put his time to good use.

I've collected a list of outfits to check out from Gilles Peterson's recent shows too. Poppy Ajudha in particular is next on my list to dig in a bit more.

That's it from me this week, I hope you find these useful. Of course if you have comments or suggestions for me to tackle a wine subject, please tell me. I aim to be of service and provide value.

Get occasional updates from Nic's Wine Club in your inbox